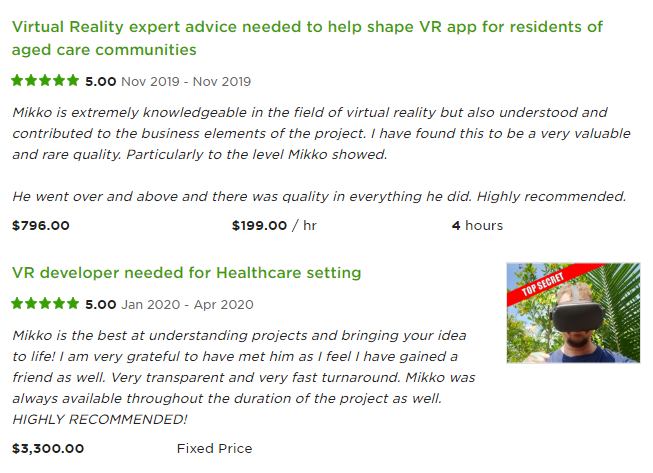 Freelance sites are notorious for short-term low-pay jobs, even the premium ones like Upwork (my favorite). But what you didn’t probably know is that the most successful freelancers can skip those kinds of jobs and the never-ending proposal battles for getting them altogether.

Here’s my story of what happened once I raised my hourly rate on Upwork to $199. Interesting things happened! 🙂

I usually don’t do much work with any hourly-based compensation as it effectively prohibits value-based pricing. Trading your time for money as a freelancer is not so much different from being employed in terms of the payoff, so why bother? I’ve always found it fairer to the client and much better business for myself to set a fixed price on a job based on how important the end result is for the client.

On top of that, my value-added services make the deal worth taking and paying a lot higher price than what perhaps a “normal” software engineer would be worth. Most of my clients are startups these days, so being deep inside the startup ecosystem of the clients is a big advantage.

Hourly-based deals have been the last resort “when everything else fails,” so to say. Sometimes, my client needs someone to be involved in a small role which doesn’t take much time but the effort and timing cannot be anticipated in advance. Then and only then… 😉

Anyway, because the platform has the built-in property of portraying the hourly rate together with total earnings and portfolios, I figured perhaps that’s something I could use.

It has been some time now since I made the move. At a point when I got so occupied with long-term projects that I didn’t expect much to be done via Upwork anyway, I thought even if no jobs came to me with the perceived cost being too high, I wouldn’t lose many opportunities that I could realistically take.

Of course, since the platform records all projects in the work history, it would be practical to have a small gig there with an hourly rate of $199. It might help in:

That being said, as I did very few jobs with hourly-based billing in the first place, I didn’t expect much. Just try and see.

What happened was pretty interesting. All of the three points realized on Upwork! And something even more!

On Upwork, I got invited to a job for an Australian startup client who didn’t care about anything else than getting his starting point set right. The kind of person with a solid management background who understood the cost of starting on the wrong path which in his case would be months of paid development of a software product that would not be sellable. This guy totally appreciated my input and chats for a couple of hours. So basically, I got paid for phone time and for writing down a short statement report that he could take forward to his stakeholders. Brilliant!

A great gig, great feedback, and a happy client regardless of the rate. Or exactly because of it!

Soon after I got another project from a German startup for developing something with a stack that I would have investigated on my own anyway. And yet another California-based startup to get a small prototype developed. A brilliant little project that was exactly for the latest VR display that I wanted to buy anyway. It was like a streak of truly great Upwork clients had just started!

The next project was for a Californian startup that wrote perhaps the most beautiful and useful review ever.

Later on, something new came out of the blue. An Upwork Enterprise Client, one of the largest companies in the world, approached 40 other freelancers and picked me for the job before even having a call with me. They had two reasons for hiring me:

This was a total surprise! Not only did I manage to get better clients but also I got a client of a completely new type! And a kind of client who does not even ask about the cost, no less. “I think we go with your estimate” was enough for them. 🙂 Not surprisingly, the project for this client broke my earlier record of pay per day (see $1,000 per Day as a Software Developer), probably because of the nature of the work. It was pure consultancy and research without any software development.

Additionally, as expected, the window-shoppers stopped bugging me too. Well, that only lasted until the platform announced a new Direct Messages feature like what Fiverr has, which allows just about anyone to send messages to freelancers without posting a project. But that is another story.

As a summary, what happened on Upwork is:

But this was not all. Consequently, I got more high-end invitations and requests on other platforms! On my LinkedIn profile page, I provide a link to my Upwork profile, which is good for advertising. So now, LinkedIn started to push good consulting opportunities and I was able to take some of the most interesting ones. I cannot say there was a direct correlation but the timing was too flawless to be ignored.

I suppose, because of the nature of the platform, I would not try to sell software development services as such with an hourly rate of $199. Anyone can calculate the cost for full-time work in a month with that rate being over $33,000. This is why value-based fixed-price deals still remain my favorite.

Yet, the rate makes very much sense in small engagements that deliver a very high impact, especially consultancy for the right kind of very specific clientele. It is a very good way for increasing the profits of your freelance business and raise the perceived status of your personal brand as well.

If you need help in pricing your freelance work, feel free to connect and have a chat on LinkedIn!