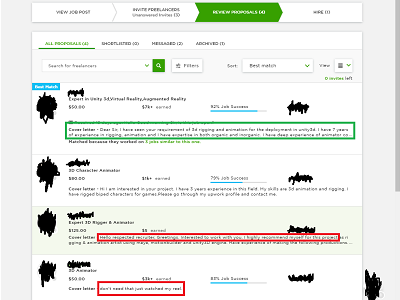 Over the years I’ve made a couple of mistakes, I’ve experimented with different styles, and I’ve seen other freelancers do things differently when communicating with clients online. Most often the initial communications are done by text. Normally, on any freelance site, there is first a proposal or application that attracts the client to talk to you, after which is all up to your own communication skills to take things further and get a gig started. (The overall process is described here.)

Code of Conduct for Online Freelancers, Part 1 gives you dos and don’ts for communicating with clients online with real-world examples based on my 5 years of being a freelancer and almost as many years of being a client on a number of freelance sites. Part 2 will discuss the business aspects of the code of conduct when doing freelance online and gives tips for conflict resolution.

Why I had to write this down and share it with you? Because too many starting freelancers get this wrong! I can only speculate the reasons, but the impact of unsuitable communications with the first clients may kill your promising freelance career before it really begins.

The first lines your client sees

Actually, what your client will see depends very much on the freelance site. Typically, it is a short bullet list with just the beginning of your message. Here’s an example of how it looks on Upwork.

List of quotations on Upwork. Make sure you know what the first message your client sees.

The first freelancer on top of the list is doing a decent job in introducing herself and stating the relevant skills that match the job perfectly.

The second last is somehow recommending himself for the job, which could not result in anything else than a slight grin on the client’s face. I couldn’t get why he calls me “recruiter” either.

The last one is a classic. With his $3,000 earnings and below 100% Job Success Score this freelancer seems to think he doesn’t need to go through the same process as everyone else. You might afford to look slightly arrogant when you have two more zeros at the end of the earnings but until then…

Other sites, like Guru, don’t give you a chance to show anything except stats. The message only appears after the client clicks the tab open on the list. Therefore, your chances as a starting freelancer are limited. At least all account verification steps should be taken to ensure your profile appears serious.

Guru’s quotation list has nothing but stats and prices.

Here, the third freelancer has not verified the account and will therefore not be contacted by anyone, ever. The first one has earned a few hundred bucks last year. Also, the keywords don’t match with the gig, which means there was no real reason for even applying for it.

Only the second profile looks credible, and it is not only about the stats. Please note how it is also the only one able to put a price tag for the job. If the site doesn’t let you write a proposal that shows on the first page the client sees, you have to focus on the rest. The ability to put at least a tentative price tag is crucial, as you have no other opportunity.

Parts 1-3 of the article series Have You Proposed Right? show you how to survive the proposal writing process as a whole. There are only a couple of things more to highlight regarding the communication style for the process of writing the proposal and the first couple of messages that usually follow it.

Surviving the first call with your client should not be that difficult. Yet, many things can go horribly wrong even if you nail the process all the way to the point where the client is interested in having a quick call with you.

The first call is when you make your first impression as a person in your client’s mind. Make sure it is a positive one. (Also, you can still be wearing nothing but your underpants, if even those, as long as it doesn’t show to your client. And don’t let the client know if you’re calling from the toilet.)

Speed is of the essence. When you do freelance for real, you are expected to reply within 24h. Practically, it means weekends too. Only hobbyists reply late. Think of a typical client who gets two dozen proposals for a good project. Being the 25th one has almost no chance of getting viewed no matter how good your proposal is. Your client’s mind is already on the other ones.

If you’re away, it is OK to send a message about it by just dropping a short note about when you’re back in business. Of course, that might increase the chance of missing the gig, but it is always better to give some reply quickly rather than trying to get back to the topic a week later.

The same goes with communication after the first few messages. Reply quickly. It is possible to miss a couple of messages here and there sometimes. If you realize you missed something, don’t get back to the client. The only impact of late replies is perceived unprofessionalism in the client’s eyes. In case you miss a message, it is better not to reply … so that your professional image is still in the client’s head the next time! Heavy freelance site users might come back to you even if you don’t expect it months later. It’s better not to destroy the good impression with replies that come way too late.

A reply almost 2 months too late means that the job has been already done by someone else… and that your client will think of you as a mere hobbyist. You might not get a second chance.

One thing that might be interesting to know is that there are clients who list not only the good freelancers but the bad ones also. You don’t want to end up on anyone’s blacklist by sending a message very late or wasting the client’s time in any other way.

Another bottleneck might be getting into an endless discussion about the exact price with a $10 difference. Having a good client base is always more important than getting one gig to pay a tiny bit more.

Code of conduct for online freelancers: The conclusion

Hopefully the above gave you enough information to nail the initial communication with a new client on freelance sites. In case of any unclear issues, feel free to connect and discuss them.

Part 2 will walk you through typical cases where it might not be clear how to treat your client when the project has already started.

All the best with freelancing online or otherwise.